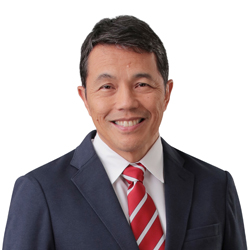 Ricardo Nicanor N. Jacinto is an independent director of Metro Retail Stores Group, Inc. (MRSGI). He also serves as the Vice-Chairman of SBS Philippines Corporation (a publicly-listed corporation) and director of its subsidiary, SBS Holdings and Enterprise Corporation. He is also an executive director of the Torre Lorenzo Development Corporation. His previous directorships were at the Manila Water Corporation and the Socialized Housing Finance Corporation, a government-owned and controlled corporation (GOCC).

Apart from his private sector directorships, Jacinto also serves as a Trustee of the Institute of Corporate Directors where he is also a highly-rated lecturer and facilitator for the organization’s director training seminars and strategic planning workshops that cater to the needs of publicly-listed companies, privately-held family firms, and GOCCs. Jacinto is also the Treasurer and Trustee of the Judicial Reform Initiative, a not-for-profit corporation which advocates reforms in the judiciary with particular emphasis on its impact on business and the economy.

He is also a faculty member of the MBA program of the University of the Philippines Virata School of Business in Bonifacio Global City.

His work experience spans over 26 years. From 1997-2011, he worked in various capacities at Ayala Corporation. From 1997-2004, he was seconded to Ayala Land, Inc. as Vice President for the Land and Community Development Group where he was responsible for leading several expansion projects, overseeing the land acquisition and development of various high-end subdivisions such as Nuvali, Westgrove Heights, Paseo de Magallanes, Ayala Southvale and Ayala Heights. Prior to joining Ayala, he worked at Bankers Trust Company (Manila OBU) and AB Capital and Investment Corporation.